Tour to Cal Cave from Trabzon

Cal cave from Trabzon is an incredible tour to a mystical place underground that will show you the rarest rocks, underground passages and waterfalls right inside the rock.

Cal cave from Trabzon is an incredible journey into the mystical and full of secrets of the underworld, which attracts tourists from all over the world so much. Immerse yourself in the atmosphere of mysteries and historical past with a group and an experienced English speaking guide as part of an inexpensive one-day tour.

Excursion to the Chal Cave from Trabzon: the beauty of the underworld

Cal cave from Trabzon, which is not like it in the whole country, is located at a great height. Approximately 1000 meters above sea level, which creates a special inaccessible atmosphere at this location. It is here, in the southwestern part of Trabzon, that the very karst cave of two completely different floors is located.

The cave is amazing not only by its appearance, but also by its gigantic size. It can safely be called the second largest in the world, but it is also worth mentioning that this cave has not yet been fully explored. Scientists have studied it only 8 kilometers deep. Numerous ponds, waterfalls and lakes give the cave charm and charm. Fans of such tours are advised to buy a trip called St. Anne's Church Tour from Trabzon.

What you can see inside Trabzon Cal cave:

Getting here is not so difficult, especially as part of an inexpensive tour called Cal cave from Trabzon, because the distance to the location from the city center is only 44 kilometers. The interior of the cave staggers the imagination of even the most experienced and sophisticated travelers.

Inside there are all the rarest rocks, incredible stalactites, many underground streams and even a huge full-fledged waterfall, perfectly preserved to this day. The monumental columns that have been supporting the ceiling in the caves for a long time give this place a special grandeur and a sense of the presence of a higher power.

If you go deep inside the cave, you can find two different routes with wooden paths - the first will be 150 meters, and the second all 400.

A real cascade lake becomes a wonderful highlight of the lower tier of the cave, which so often flaunts in photographs and videos from this attraction. The picturesqueness of this place is difficult to overestimate, which is why many tourists buy this trip just to see it.

As for the second tier of Cal cave from Trabzon there is a cozy cafe that meets the general atmosphere of the caves. Local cuisine consists mainly of national Turkish dishes and even gourmets will like it.

It is not at all surprising that after all this information, the Turks called Cal a "hidden paradise", because finding entire natural complexes inside the rock is a real miracle. The opening hours of the cave have remained unchanged for quite a long time - from 9 am to 7 pm. The cave receives visitors as part of a profitable tour every year, which makes it a true Turkish treasure. 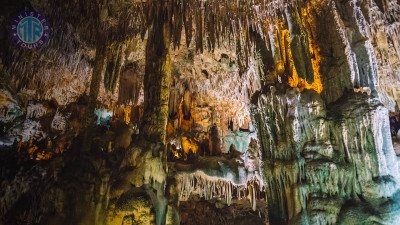 Cal cave from Trabzon our advantages and the reason for choosing

Cal cave from Trabzon is accompanied by an experienced English speaking guide, visiting all locations and insurance is included in the price.