Dervishes Show in Cappadocia is a fascinating and mysticism-filled national dance. The show differs significantly from other local fun, because this mysterious rite carries not only the unearthly beauty of workshops and precise movements, but also a gigantic semantic subtext that has invariably been preserved for almost eight hundred years. The fact is that the people of dervishes have been leading an extremely humble lifestyle for many hundreds of years, based primarily on unity with higher powers. According to ancient legends, representatives of this people have supernatural powers and amazing talents, which the Almighty sends them for their unlimited loyalty.

So, as part of the Dervishes Show in Cappadocia, our guests will see with their own eyes an amazing way of performing for a modern person, during which the monks create a special vortex-like stream using continuous rotating movements - this is the so-called whirling ceremony. Each of the striking movements carries a special subtext, the dance of the monks seems to tell its own story. It is also interesting that the performers make their movements exclusively to the left, since this is the side of the heart in which God lives. Feedback from visitors unanimously claims that after the first minutes they felt an incredible hypnotic effect, as if a special protective field was formed around them. One of these rituals is the Sema ritual, which also differs from ordinary dance by the presence of chants, reciting prayers, and playing the oldest musical instruments.

What we need to know about Dervishes Show in Cappadocia

Dervishes Show in Cappadocia is Special attention should be paid to the luxurious Turkish costumes, symbolizing the beginning of life and the path, which, unfortunately, with their massiveness and brightness can scare young children, therefore, entry to this event for kids is allowed only from 10 years old.

All guests who liked this performance are highly recommended to book a concert show of the Turkish night in Cappadocia for a deeper immersion in the ancient Ottoman culture. There is also a great alternative for planning an inexpensive family or romantic evening - a dervish dance dinner.

The dervishes show in Cappadocia will take place for an hour. Before visiting, you need to know a few fundamental rules, for example:

Dervishes Show in Cappadocia price of such an amazing experience is Cheap, and therefore, every traveler can afford such a tour. Cappadocia has something to surprise, many tourists admire a grand hot air balloon tour, an exciting Camel Safari through the mountains and valleys, or ancient churches right inside the cliff, which can be bypassed on a dynamic ATV ride. 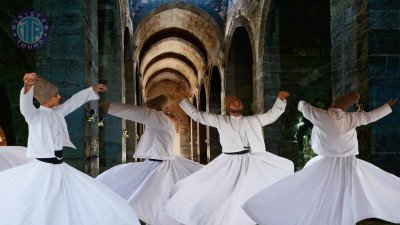 Dervishes Show in Cappadocia our advantages and the reason for choosing Salt Lake in Cappadocia will allow you to first enjoy the amazing mountain landscapes, and after a couple of hours admire the perfectly smooth water surface? ... The Turkish bath Hamam in Cappadocia will help you to fully rest and relax after intense hikes to local attractions and to some extent even become a continuation of the excurs ... Cappadocia Balloon Parade - how Cheap to see with your own eyes a real large-scale balloon festival at a particularly good time of day. ... Balloon Flight in Cappadocia will be the most spectacular part of your trip. The huge dome will soar in the rays of the dawn sun over the alien landscapes, allowing you to ful ... Quad Bike Safari in Cappadocia is a high-speed ride through the most beautiful Turkish beauty in maneuverable mini-cars for real discoverers and extreme lovers. ... Jeep safari in Cappadocia is a dynamic off-road trip through the mountains and valleys, allowing you to feel like a discoverer of ancient natural treasures. ...