Horseback Riding in Cappadocia is exactly the excursion to which you should pay your attention in the first place. It is not for nothing that the area is translated from the ancient Persian language as “the country of beautiful horses”.

While exploring alien landscapes, riding this noble animal, you will get several times more positive emotions and impressions.

Who suits for Horseback riding in Cappadocia:

The managers of the Minister Tours travel agency can offer their tourists several options for the horse riding program at favorable prices in 2021, which are adapted for beginners but will also be of interest to experienced riders.

In order to ride horses, you will go to one of the farms in Goreme, where, before getting you into the saddle and embarking on an exciting journey along the route, the instructor will conduct a mandatory safety briefing, familiarize you with the theoretical part and only then move on to practical classes, during which he will check how well the acquired knowledge is mastered. In most cases, the horse excursion takes place at a walking pace, under the careful supervision of trainers. All animals of the ranch are good-natured, calm, and well trained. The tour can be safely booked while on vacation with children over 6 years old. And as part of a Private program, order a romantic walk for two at sunset.

You can also book a Camel Riding in Cappadocia - an exotic option for spending your leisure time.

To ride horses in Cappadocia as comfortably as possible, pay attention to the clothes in which you plan to ride. The main requirements for the bottom are long pants, made of non-slip material and sneakers. The best headgear when riding is the helmet, which is already included in the price.

Horseback riding in Cappadocia will take you along narrow, winding paths past stone giants and colorful rocks; along flat valleys; past the picturesque houses of local residents, entwined with vines. During the horseback ride, you will learn a part of the history of the region that was not previously known.

For example, that such a symbolic name Cappadocia was given a reason. Archaeologists have found clay tablets dating from 1460 BC. in which the Hittites described the technique of breeding and keeping horses. From them, we know that the famous Cappadocian horses were famous for their strength, endurance, speed, grace, and intelligence. Valued in military affairs, they were both currency and tribute and a valuable gift. Scientists cannot come to a single conclusion, but most likely their ancestors were wild horses living on these lands and possessing all the qualities described. During the times of the Roman and Ottoman Empire, stud farms were built here many times, where the valuable breeding stock was bred. 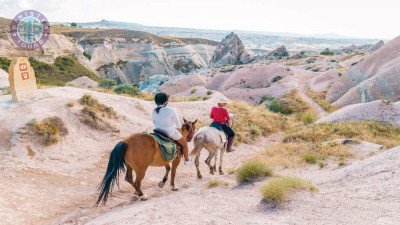 Cappadocia Horse Riding our advantages and the reason for choosing